Spetses is a picturesque, historic island within the Saronic Gulf. Only 54 nautical miles from Athens makes it a popular destination not only for the Greeks, but also for international travelers. “The island of perfumes”, as it was named by the Venetians, is a beautiful, car-free island famous for its significant contribution to the 1821 War of Independence. Spetses has an elegant atmosphere thanks to its well-preserved Venetian mansions of its Town.

There are many old footpaths in Spetses for hikers to enjoy. They lead to tiny chapels, secluded beaches and hilltops with fantastic views. Touring the island by bicycle is another great way to experience this beautiful island with its lovely nature. Or why not take a romantic trip around the island in horse–drawn carriages.

The biggest celebration of the island is the Armata. It takes place every September and involves a fleet of the island’s boats, music and fireworks in honor of naval victory during the Greek revolution.

Bekiri’s Cave, close to the beach of Agios Anargyros, is a unique spot of natural beauty. The interior of the cave is amazing; stalactites, stalagmites, blue-green water and a small sandy beach.

Spetses Beaches: There are many beautiful beaches in Spetses. Agioi Anargiroi is one of the largest and most developed beaches on the island with sand, pebbles and deep waters. Agia Paraskevi is a beautiful sandy and pebbled, organised beach with crystal water shaded by a pine forest. The Agia Marina beach is the most visited beach on Spetses. It is an organised beach with beach bars, restaurants and water sports. Xylokeriza is a lovely sandy and pebbled beach surrounded by much greenery. It is one of the most untouched and calm beaches on the island. Vrellos beach, also known as Paradise, is a lovely sandy and pebbled beach surrounded by pine forest. With pine trees that stretch down to the beach, Zogeria beach is a secluded beach located in a lovely cove. The locals consider it the most beautiful beach on the island with its clean and turquoise colored water. 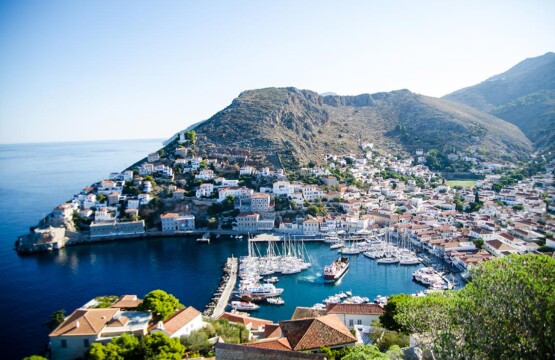