Ermioni is a picturesque seaside town on the southeast shore of Argolida, Peloponnese, approx. 180 km from Athens. It has taken its name from the legendary hero Hermion, who founded the ancient city of Hermione. It faces the islands of Hydra and Dokos. Ermioni is very central to many places of historical and cultural interest, surrounded by charming coves and beaches.

During the classic era it was well known for its shipbuilders and also for the production of porfyra, a very important red dye. This dye was used for the colouring of the uniforms of many armies, including that of Alexander the Great.

Ermioni can be divided into three sections. The commercial port Limani is located on the northern side. Mandrakia is on the southern side of the Ermoni peninsula and is the liveliest part of Ermioni. At the eastern end is the pine forest area Bisti. Bisti is an area of special interest for its historical findings such as the ruins of the temples of Demeter, Dionysus and Poseidon that lie in the region.

Ermioni has a reputation for producing fine products, such as pomegranates, citrus fruits and olive oil.

The closest beaches in Ermioni are the two pebble beaches of Bisti with crystal blue waters and beautiful landscape. Near Bisti there is also a small sandy beach called Maderi. The surrounding areas of Ermioni offer some beautiful beaches, bays and coves.

If you like hiking trails, you should definitely cross the small Katafyki Gorge that links Ermioni with Fournoi. It is a 30 min walk and is suitable for the whole family. The wild beauty of this gorge will astonish you.

There are a couple of diving centers in Ermioni that offer courses and organise diving trips to interesting reefs and islets of the Saronic Gulf.

In July/August an international music festival takes place. It gathers choral groups, symphonic orchestras and soloists from all over Greece and abroad.

The annual Festival of the Pomegranate is in October! 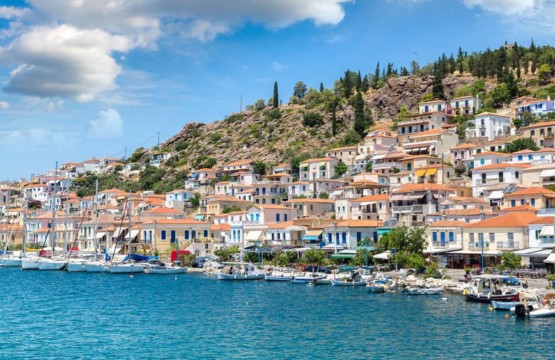